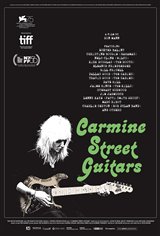 Carmine Street Guitars is a little shop in the heart of the Greenwich Village, New York, founded over 20 years ago. The shop is a little gem for both guitar players and lovers of old New York, where Rick Kelly and his apprentice Cindy Hulej craft guitars from scratch using repurposed wood scavenged from historic New York buildings for musicians from all over the world.

Kelly is an old soul who doesn’t believe in cellphones or the Internet. He believes in bringing musicians and the people who built the guitars together in a space where they can hang out and be part of a community that celebrates what is often considered a lost art.

This Canadian documentary brings together life experiences, art and creativity to create a film that preserves an important part of New York’s history.