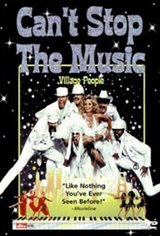 Glitz producer Allan Carr tries to cash in on the late-'70s disco boom with Can't Stop the Music -- a film of such Brobdingnagian banality that it almost in itself stopped the disco movement cold. Comedienne Nancy Walker directed this musical chronicle, purporting to relate the legend of the formation of the disco group The Village People.

Valerie Perrine is Samantha Simpson, a helpful ex-model who attempts to get her roommate, Jack Morrell's (Steve Guttenberg), songwriting career off the ground by assembling a motley group of her Greenwich Village friends (The Village People) together to cut a demo tape of Jack's ditties.

All Samantha has to do is charm the square lawyer Ron White (Bruce Jenner) in order to get him to listen to The Village People's scintillating disco strains.