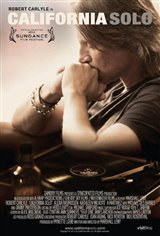 Former Britpop rocker Lachlan MacAldonich (Robert Carlyle) lives a comfortably numb existence in farm country just outside Los Angeles. To make a living, he works on an organic farm, but each night, he holes out in his crummy apartment to record "Flame-Outs," his podcast that recounts the tragic deaths of great musicians.

The only bright light in his humdrum existence is Beau (Alexia Rasmussen), a beautiful aspiring actress and amateur chef who frequents the Silver Lake farmers' market, where Lachlan sells produce as part of his job.

When Lachlan is stopped by police one night and is found to have alcohol in his system, he faces deportation. In a desperate effort to stay in the U.S., he contacts his estranged ex-wife and daughter, because if he can prove his removal would cause "extreme hardship" to a U.S. citizen spouse or relative, he might be able to fight deportation.