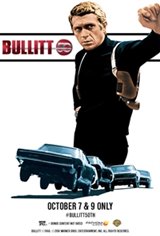 Fathom Events and Warner Bros. Entertainment are bringing Bullitt 50th Anniversary to select cinemas nationwide for a special two-day event, which includes bonus content. Steve McQueen stars as Lt. Frank Bullitt in the role that made him a superstar as the hard-bitten police detective assigned to protect the star witness in a Congressional investigation.

But when the witness is murdered, Bullitt mercilessly tracks a trail of lies and corruption that leads all the way to the halls of power in Washington.