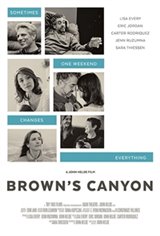 Setting out with dreams of launching a new business and finding inner peace, two would-be life coaches (Lisa Every & Jenn Ruzumna) hope to resuscitate their stalled careers by hosting a women's mindfulness retreat in the Utah wilderness.

But, when surprise guests, a mudslide, and other minor disasters conspire against them, they're forced to take a hard look at their own messy lives over the course of one very awkward weekend. Brown's Canyon is Seattle-based director John Helde's second narrative feature and was filmed in 11 days in Utah by a Seattle-based cast and crew.