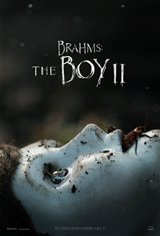 Following a violent break-in at their apartment in the city, Liza (Katie Holmes), who nearly died during the attack, and her husband Sean (Owain Yeoman) decide to take their son Jude (Christopher Convery), who hasn't spoken since the break-in, and move a quieter setting on the advice of his therapist, Dr. Lawrence (Anjali Jay).

They move to the guest house on the property of the secluded Heelshire mansion. When they go to explore in the woods, Jude hears a mysterious voice calling out to him and uncovers Brahms the doll, buried in the ground. He brings Brahms back to the house and Liza helps clean him up, but when Jude writes a message on his notepad to say the doll has a whole set of rules the family must live by, she investigates the doll's history and discovers a series of gruesome murders tied to Brahms. After Liza finds Jude's teddy bear torn to shreds, followed by a drawing in Jude's notepad that shows the groundskeeper's dog has been killed and others that depict Liza and Sean shot dead, it soon becomes apparent that she must act quickly.