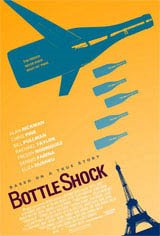 Based on a true story, Bottle Shock chronicles the events leading up to the famous Paris Tastings of 1976, wherein Napa wines bested the exalted French wines in a blind tasting and put California wines on the map for good. The story is told through the lives of father and son, Jim (Bill Pullman) and Bo Barrett (Chris Pine), who founded Chateau Montelena in the early 1970s and whose Chardonnay went on to win what was eventually coined "Judgment of Paris." Jim Barrett, who had been a successful real estate attorney previously, is emblematic of the California vintners' spirit—mavericks who had come to Napa on a quest to make world class wines.

Bottle Shock is many things: the story of Steve Spurrier (Alan Rickman), an unwitting British wine shop owner in Paris whose publicity stunt set the stage for a paradigm shift in the wine world; a father and son story as Jim and Bo overcome their differences to save Chateau Montelena from creditors and what they think is an entirely ruined vintage; a romance between a young beautiful university student (Rachael Taylor) who came to learn the wine business first hand and wound up falling in love with a vintner's son who was just coming of age; and finally, the story of a young Hispanic vintner (Freddy Rodriguez) just branching out on his own. Against the backdrop of the turbulent '70s and in the shadow of the French who had dominated the world's viticulture and viniculture for centuries, these "hicks from the sticks" rose up for California, for America, for wine. And the world of wine was never the same.