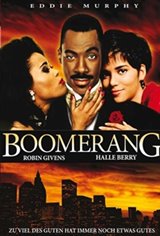 Hotshot ad exec Marcus Graham (Eddie Murphy) is an insatiable womanizer. He is thus hardly prepared for his new boss, Jacqueline (Robin Givens). In terms of things romantic, Jacqueline is nothing more or less than a female version of Marcus -- and now, for the first time, he's getting the runaround.