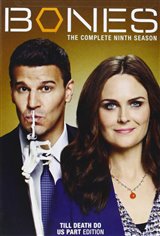 Cyber-genius serial killer Christopher Pelant (Andrew Leeds) has blackmailed Booth into withdrawing his marriage proposal to Bones without letting her know why. Booth reaches out to old army buddies for help, while Pelant plans to separate Bones and Booth permanently.

Sweets (John Francis Daley) goes on sabbatical from the FBI; the team creates a fake copycat murder scene resembling Pelant's work in hopes he'll contact them about it; Brennan is chosen to be a juror in a murder case and a promising young gymnast is murdered. These are just a few of the cases the team takes on in Season Nine.