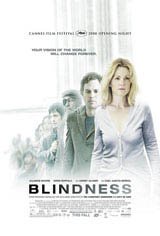 Evocative of the recent SARS epidemic, or occurrences in the New Orleans Super Dome during Hurricane Katrina, Blindness takes place in a city which is ravaged by an epidemic of instant "white blindness". Those first afflicted are quarantined by the authorities in an abandoned mental hospital where the newly created "society of the blind" quickly breaks down. Criminals and the physically powerful prey upon the weak, hoarding the meager food rations and committing horrific acts.

There is, however, one eyewitness to the nightmare; a woman whose sight is unaffected by the plague follows her afflicted husband to quarantine. There, keeping her sight a secret, she guides seven strangers who have become, in essence, a family. She leads them out of quarantine and onto the ravaged streets of the city, which has seen all vestiges of civilization crumble. Their voyage is fraught with danger, yet their survival and ultimate redemption reflect the tenacity and depth of the human spirit.

Blindness reminds us of the shocking fragility of our social institutions, the thin veneer of our "civilized" world, and the responsibility for every individual to protect their dignity at all costs.