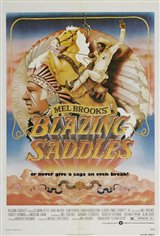 A new railroad is being built in the American Old West, and when it starts to become apparent that quicksand will get in the way of construction, the route is diverted and has to go through a frontier town called Rock Ridge. Greedy State Attorney General Hedley Lamarr (Harvey Korman) is intent on buying the land alongside the railroad, and so he tries to drive the townspeople out.

One of Hedley’s plans was to appoint a Black sheriff in town (Cleavon Little) to anger the people, but this plan backfires and he resorts to recruiting an army of thugs out of desperation. It’s up to Sheriff Bart to stop the conniving Hedley and save the small town of Rock Ridge.