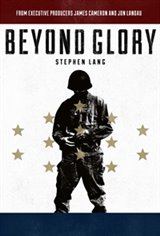 Based on firsthand accounts of Congressional Medal of Honor recipients, BEYOND GLORY was conceived as a one-man performance piece by acclaimed actor Stephen Lang. Since 2003, it has played over four hundred times to civilian and military audiences across the globe, garnering universal critical accolades.

In 2014, Lang invited filmmakers to accompany him on his journey to bring the show to the war zones of the Middle East and heartland of America.