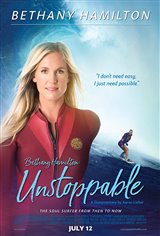 Bethany Hamilton made headlines in 2003 when she was attacked by a tiger shark while surfing in her hometown of Kauai, Hawaii. Although the shark had bitten off most of Hamilton's left arm, causing her to lose 60 percent of her blood, she survived. Unwilling to give up on the sport, she taught herself to surf with one arm in the hope of returning to competitive surfing. Her story quickly became an inspiration to many.

Bethany was born February 8, 1990 in Kauai, Hawaii. Her parents, Tom and Cheri, taught Bethany to surf at a young age, along with her brothers, Noah and Timmy. As her surfing abilities progressed rapidly, Bethany began to compete. At the age of eight, she came first place in a Quicksilver surfing contest and began to enter and win major surf competitions throughout Hawaii. With many first place wins under her belt, Bethany knew she wanted to go pro and make the sport her career. She picked up a sponsor, Rip Curl, which helped her with her professional plans.

Her plans on turning pro were soon put to a halt on the morning of October 31, 2003 while out surfing. In the ocean at Tunnels Beach—along with her friend Alana Blanchard and Blanchard's dad and brother—Bethany was relaxing on her board laying sideways with her left arm dangling in the water as she waited for the next wave to roll in. Her friends were floating nearby. Suddenly, there was a flash of gray. Bethany described the incident as merely feeling a couple of fast tugs, that were over in a few seconds. A few seconds was all it took for the 15-foot tiger shark to bite off her left arm, nearly to the shoulder. Bethany watched in shock as the water around her turned bright red. Somehow, she managed to stay calm.

"It's funny," Bethany said, "you would think having your arm bitten off would really hurt. But there was no pain at the time." Reports say that if the shark had bitten two more inches up her arm, the attack would have been fatal.

Bethany then screamed: "I just got attacked by a shark," and started paddling toward shore. It was a quarter of a mile back, but one thought kept repeating in her head: "Get to the beach." Her friends quickly reached her and helped pull her in. Once they reached shore, they used a shirt and a surfboard leash to make a tourniquet around what was left of her arm until paramedics came.

On the morning of the shark attack, Bethany's dad Tom had been scheduled for knee surgery and was already on the operating table when the ambulance brought her in. His surgeon was preparing to start the operation when a nurse burst into the room. She said, "There's a 13-year-old girl coming, a shark attack victim." The next day, Bethany, tired and feeling distraught, told her father she would become a surf photographer. But after seven days of recovery in the hospital and her stitches were removed, Bethany had a change of heart.

Less than one month after the attack, Bethany returned to surfing. The challenge was to teach herself how to surf with one arm, which she did using a longer and thicker custom-made surfboard to help her along. Since the incident Bethany has returned to competitive surfing. In 2005, she took 1st place in the NSSA National Championships, a goal she had been trying to achieve since before the shark attack. In 2008, she began competing full time in the Association of Surfing Professionals World Qualifying Series (WQS), finishing 3rd amongst many of the world's best women surfers.

Based on her book Soul Surfer, Bethany's story was been made into a movie of the same name, starring AnnaSophia Robb as Bethany. Filmed on location in Kauai and Oahu, Bethany performed her own stunt surfing in the movie and also contributed to the script and editing process.

Until recently she was a champion surfer, competing six months of the year around the world. In 2013, she married, and now has two sons, Tobias and Wesley. She appears in the 2019 documentary, Bethany Hamilton: Unstoppable.