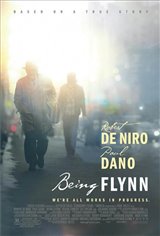 Young writer Nick Flynn's (Paul Dano) mother, Jody (Julianne Moore), has passed away and he hasn't seen his father, Jonathan (Robert De Niro), since the man walked out on them 18 years ago.

Since abandoning his wife and child, Jonathan Flynn, who considers himself a great writer, scraped through life, spending time in prison for cashing forged checks. After prison, he worked as a cab driver, but lost his job due to his drinking and eccentricities. Facing eviction from his apartment, Jonathan reaches out to Nick.