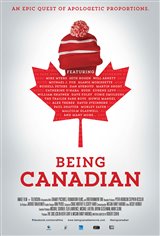 Calgary native Robert Cohen moved to Los Angeles to start a career as a TV comedy writer. Once there, he began to notice that outside of Canada, people knew very little about his homeland, despite the fact that so many Canadians are Hollywood success stories.

After decades of putting up with such ignorance, as well as insults and indifference about Canada, Robert finally decided to set off on a road trip across Canada to prove his country is more than just maple syrup and Mounties.