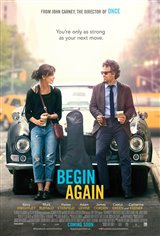 College sweethearts Greta (Keira Knightley) and Dave (Adam Levine) are songwriting partners who move to New York after he lands a deal with a major label. When he strays, heartbroken Greta considers moving back home to Britain.

Before she leaves, she's spotted on stage by a down-on-his-luck record producer (Mark Ruffalo) who recognizes her musical talent and opens up an entire world of possibility for both of them.