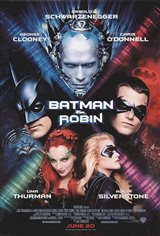 This was the third follow-up to Tim Burton's Batman (1989), the original revisionist look at the Gotham City legend, as well as the second in the Batman series directed by Joel Schumacher and the first featuring George Clooney as the Caped Crusader; it features not one but two super-villains, and a new heroine to fight crime alongside Bruce Wayne (aka Batman) and Dick Grayson (aka Robin) (Chris O'Donnell). The experiments of Dr. Victor Fries (Arnold Schwarzenegger) to preserve his late wife cryogenically have gone horribly wrong, turning him into the evil genius Mr. Freeze, who must keep his body at sub-zero temperature in order to say alive -- and he wants to put Gotham City on ice.

Shy horticulturist Pamela Isley (Uma Thurman) goes a bit wild with a Venus Fly Trap-like creation she's been working on and mutates into Poison Ivy, who wants to kill all the people on Earth so plants can take over. Can Batman and Robin stop these fiends before their plans go too far?

Meanwhile, Bruce and Dick's faithful butler Alfred (Michael Gough) isn't feeling well, so his niece Barbara (Alicia Silverstone) comes to pay a visit. When Barbara finds out what her uncle's employers do in their spare time, she decides she wants in on the action, and she joins the crime fighting twosome as Batgirl.

Batman & Robin also features Jesse Ventura in a small role as a prison guard; it would be his last film role before becoming Governor of Minnesota in 1998.