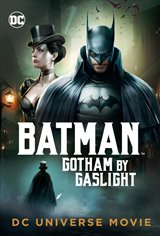 A murderer known as "The Ripper" is butchering women as they walk the streets of a Victorian Age Gotham City at night. The murders have the town in an uproar, as the police do nothing to solve the crimes.

Batman (voice of Bruce Greenwood) decides he'll find "The Ripper" and put a stop to the murders. However, a wrench is thrown into his plans when the police arrest Bruce Wayne, believing him to be the murderer.