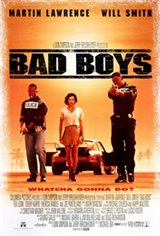 Former video director Michael Bay had his first big hit with this action comedy, which also returned producers Jerry Bruckheimer and Don Simpson to the big-budget, high-violence movies that they successfully churned out in the '80s. Mike Lowrey (Will Smith) and Marcus Burnett (Martin Lawrence) are two Miami cops who watch as 100 million dollars in heroin, from the biggest drug bust of their careers, is stolen out of the basement of police headquarters.

This puts them hot on the trail of French drug lord Fouchet (Tchéky Karyo), who leaves a trail of bodies in his wake and only one witness, Julie Mott (Téa Leoni), who quickly teams up with our heroes.

Comic hijinks ensue when plot complications force Mike to impersonate the married Marcus, to the point of moving in with his wife and children, while Marcus takes over Mike's bachelor pad and lifestyle. Car chases, snappy one-liners, and nonstop pacing fuel this umpteenth variation on the cop buddy formula.