Back to the Fatherland 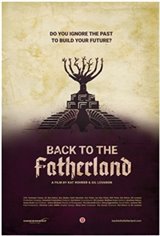 Follows the journey of three families in transition—Israeli grandchildren from the “Third Generation” and their respective grandparents.

Filmmaker Gil Levanon and Kat Maschek struck up a friendship during their time at college in New York City 10 years earlier. Gil comes from Israel, Kat from Austria. Their families' history is strikingly different. Gil is the granddaughter of a Holocaust survivor, Kat's grandfather was a Nazi officer.

Gil and Kat decide to go on a journey to find other grandchildren of Holocaust survivors who had moved to Germany and Austria and learn how their grandparents reacted to that decision. Could returning to the site of so much pain decades earlier create reconciliation between generations?

In English, German and Hebrew (with English subtitles).