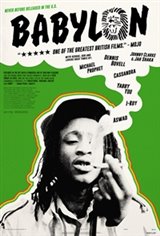 Babylon is a gritty, neorealist account of the lives of a group of West Indian youths living in London. Blue (Brinsley Forde) is the Rastafarian leader of a Sound System (a mobile disc-jockey team who spin reggae records at clubs, parties, and other gatherings) who is trying to prepare for an upcoming Sound System competition.

Blue's love of music is one of the few positive outlets in his life; with the crime and violence of London's slums, the verbal and physical attacks by racist whites, and the jealousy of other DJs, Blue is reaching the end of his rope.

That rope begins to fray when Blue is fired from his job, is brutally attacked by police officers, and discovers that his DJ equipment has been destroyed by angry neighbors.

Unlike most films about reggae music and culture, Babylon doesn't explore the sunny side of Jamaican life or West Indian gangland culture; instead, it looks at how the implicit radicalism of reggae mirrored political and social concerns in the urban areas outside Jamaica where the music was so enthusiastically embraced.