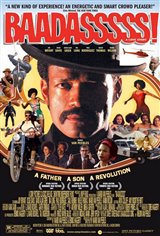 Watch Trailer
Director Melvin Van Peebles stunned the world with his debut feature. Filmed in France and selected as the French entry in the San Francisco Film Festival, Melvin's film was awarded the top prize. In 1968, for a black man to walk up to the podium and accept the top festival award for a film he had to go abroad to make was big news.

Melvin was determined to push Hollywood boundaries with the groundbreaking, controversial, Sweet Sweetback's Baadasssss Song. Turned down by every major studio, Melvin was forced to self-finance. Despite the fact that initially only two U.S. theaters would play his film, Sweetback became the top-grossing independent hit of 1971, spawning a decade of similar studio fare such as Shaft, Superfly and Foxy Brown. Melvin had brought the hood to Hollywood.