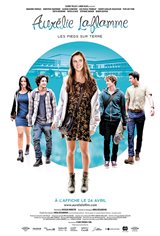 Aurélie Laflamme optimistically enters her fifth and final year of high school. She has a fulfilling relationship with her boyfriend Nicolas; she and her best friend Kat get along great and her transition to public school is going smoothly. Or almost. Her French teacher, who perceives in Aurélie a potential writer, puts pressure on her. And at home, Aurélie, who has not stopped mourning for her father, has a strained relationship with her mother France's new partner.

France is also displaying strange, new quirks, including impatience, hot flashes, inability to concentrate, etc. Aurélie thinks there’s no doubt—her mother is going through menopause. Wrong. France is pregnant, but is afraid to admit it to her daughter. Meanwhile, Aurélie is dumped by Nicolas, who’s jealous of her friendship with Tommy. Depressed, Aurélie goes to a party, where a boy catches her eye. Under duress, she makes a fool of herself in front of him. Not wanting to give up easily, she claims to have a twin sister.