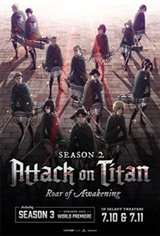 Eren's battle against the Titans rages on! After fighting the Female Titan, he has no time to rest as a hoard approaches Wall Rose. A new war begins and as they face the threat to humanity, they begin to unearth terrifying secrets. What are the Titans really and where they get their power - and who's really on their side? Followed by the world premiere of Season 3 episode 1!