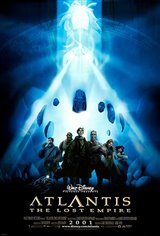 Milo Thatch (Fox) is a museum cartographer who has dreams of finishing what his grandfather began, finding the lost empire of Atlantis. When a long-lost journal is discovered, Milo finds new clues as to the whereabouts of Atlantis, and gets funding from an eccentric billionaire to set up an expedition.

Although inexperienced in exploring, Milo sets off with Captain Rourke (Garner) and his crew in search of Atlantis. Depending on Milo's knowledge and quick thinking, the expedition arrives. But what they find goes beyond their wildest dreams and their interference will cause a number of problems that only Milo can resolve.