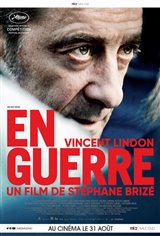 Two years earlier, the employees of Perrin Industrie, an automotive parts plant in France owned by a German conglomerate, agreed to significant wage cuts to avoid the closure of the company, in return for a guarantee of at least five more years of employment.

They’re outraged when they find out management is planning to close the doors within five months, despite a profit of 17 million euros. Union leader, spokesperson and factory worker Laurent Amedeo orders a strike and demands a meeting with the CEO of the firm, Martin Hauser.

But some union members, feeling that they’ve already lost, give in and accept a substantially increased severance pay, especially when it looks like a meeting with Hauser may never happen. Laurent, however, doesn’t give up.