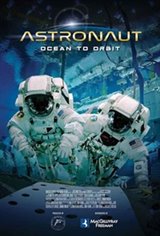 In 2013, a critical life-support system on the International Space Station failed, requiring an immediate spacewalk to fix it. Astronaut Chris Cassidy made the repair and saved the space station. He was trained extensively for space walks here on Earth. But how do you train to work in microgravity here on Earth?

Astronaut: Ocean to Orbit reveals the ways in which NASA uses underwater environments to simulate life and work in space. Join Chris Cassidy as he floats in his space suit alongside a full-sized mock-up the International Space Station in a giant underwater facility in Houston.

Dive to the sea floor with astronaut Jeanette Epps as she lives underwater with fellow astronauts for ten continuous days at Aquarius Reef Base in Florida.