Another Kind of Wedding 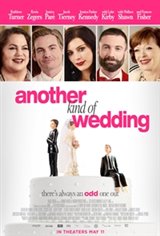 Matthew (Jacob Tierney) and Louisa (Jessica Parker Kennedy) are getting married at a luxurious hotel in Montreal. His sister Carrie (Jessica Paré) arrives from Toronto for the wedding with their younger brother Kurt (Kevin Zegers), who used to be Louisa’s boyfriend.

Their mothers, the extravagant and capricious Barbara (Kathleen Turner) and formidable businesswoman Tammy (Frances Fisher), are separated. Barbara is accompanied by her old friend, Albert (Wallace Shawn). During the weekend, a number of grievances are aired, while Kurt tries to get Louisa back.