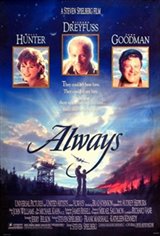 For all its state-of-the-art special effects, Always is essentially a remake of the 1943 Spencer Tracy-Irene Dunne fantasy vehicle A Guy Named Joe--minus the wartime context. Richard Dreyfuss stars as a reckless fire-fighting pilot who is killed in what was to have been his final mission.

Ascending to Heaven, Dreyfuss is introduced to businesslike angel Audrey Hepburn (playing the equivalent of the Lionel Barrymore role in A Guy Named Joe). Hepburn instructs the spectral Dreyfuss to pass on his aviation knowhow to his young successor, Brad Johnson.

Our ghostly hero also smoothes the course of romance for his earthly girl friend Holly Hunter, who after several months' worth of grieving has fallen in love with Johnson. John Goodman injects a dose of comedy relief as Dreyfuss' faithful buddy.