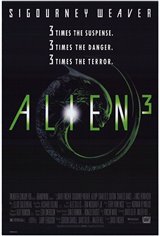 Acclaimed director David Fincher's promising career was lucky to survive this astonishingly wrong-headed, almost universally despised second sequel to Alien (1979). The film careens into oblivion virtually from the beginning, as Lt. Ellen Ripley (Sigourney Weaver) is the only survivor of a crash-landing on a hellish, God-forsaken prison planet.

Not only does the crash kill little Newt, completely obviating the entire point of the superior Aliens (1986), but Fincher then compounds his betrayal of that film's fans by having Ripley attend the girl's gruesome autopsy and barely bat an eye as the child's chest is bloodily ripped open with a steel bonesaw.

Things just go downhill from there, as the rather unthreatening rapists and murderers harass Ripley and curse a great deal before being torn apart by large fans, having their heads crushed by the unconvincing CGI alien, and finally volunteering to be murdered by the beast rather than letting the evil Company get hold of it.

Fincher does the best he can with a terrible script, and there are some nice supporting turns by Charles S. Dutton, Charles Dance, and Brian Glover, but nothing could redeem the film's first 15 minutes.

By the time Ripley takes a suicidal swan-dive into a vat of molten lead, cradling a baby alien as it explodes from her chest, many viewers will not know whether to reach for the remote control or a warm bath and a razorblade. A loathsome experience by any standard, Alien 3 still made enough money for Weaver to return as a Ripley clone in Alien Resurrection (1997).