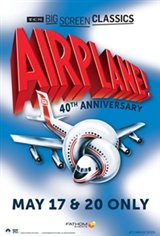 An ex-fighter pilot is forced to take over the controls of an airliner when the flight crew succumbs to food poisoning.

Robert Hays and Julie Hagerty join panicky passengers, inept ground controllers and an inflatable auto-pilot (named "Otto," of course!) in the disaster-film spoof voted "one of the 10 funniest movies ever made" by the American Film Institute.