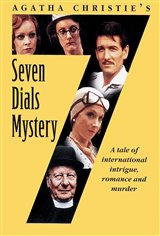 Following a mysterious death at the estate belonging to her father, Lord Caterham (Sir John Gielgud), Lady Eileen "Bundle" Brent (Cheryl Campbell) decides to investigate. Gerry, the man who was found dead in his bedroom, had a problem with oversleeping. As a joke, the rest of the party guests, who had rented the estate, put eight alarm clocks in his room. The next morning, when they went to check on him, he was dead and one alarm clock was missing.

Following another death, Bundle hears about a secret society called the Seven Dials and teams up with Jimmy Thesiger (James Warwick), who was also a guest at the estate party when Gerry died, to discover more about this society and to find the murderer.

Based on the novel by Agatha Christie.