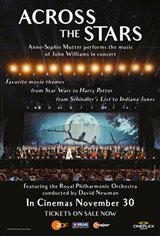 Celebrate the movie themes of John Williams. With ACROSS THE STARS Anne-Sophie Mutter presents some of the most outstanding works of composer and multiple Oscar Award-winner John Williams in the dream-like scenery of Munich Königsplatz. Captured live it was the first-ever open-air concert of Mutter's unprecedented career. Anne-Sophie Mutter and John Williams have been close friends for many years, which imbues this project with a truly special meaning: "Most of the works I perform with the Royal Philharmonic Orchestra in Munich have been especially arranged for me - the pieces are absolutely new in this form and are performed at this concert for the very first time!" Mutter explains. The programme includes pieces from Star Wars, Schindler's List, Memoirs of a Geisha, Harry Potter, Dracula, Jurassic Park and ET. Includes a special introduction from John Williams and Anne-Sophie Mutter. In Cinemas November 30th and captured live in Munich's Konigplatz.