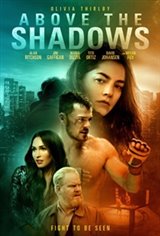 Holly (Olivia Thirlby) is invisible, although she wasn't always that way. Over the years, as the middle child in a family who ignored her, she became gradually less visible until she didn't appear at all. Using her affliction to her advantage, Holly makes a living by taking secret photos of celebrities.

After more than a decade of existing in the shadows, Holly meets the one man who can see her, disgraced MMA fighter Shayne Blackwell (Alan Ritchson), who now works as a bouncer. Holly discovers that it was one of her tabloid photographs that caused his downfall. Filled with regret, Holly tries to undo the damage she's done, and restore him to his former glory. She hopes that in doing so, it may put an end to her loneliness.