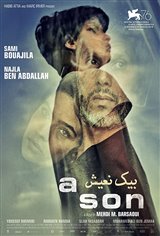 Tunisia, 2011. Fares and Meriem are a modern couple, representative of the economic elite of a rapidly changing country in the aftermath of the fall of President Ben Ali. Fares runs a large factory and Meriem heads the public relations office of a multinational company. Their only son, Aziz, 11, is the center of their lives. During a car trip in the south of the country, they accidentally drive past an exchange of fire between Islamic militants, and Aziz, who is in the back seat, is hit by a stray bullet. Doctors at the hospital explain to Fares that only a quick liver transplant can save the boy. But preparations for the operation reveal a family secret.