A Rage in Harlem 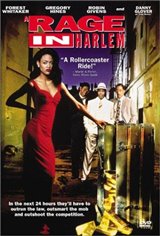 The film begins in Natchez, Mississippi in 1956. During a police shoot-out with the mob leader Slim's (Badja Djola) gang, Slim's moll Imabelle (Robin Givens) takes off with a cadre of stolen gold. As a result, Imabelle is chased by Slim's mob from Mississippi to New York. By the time she reaches Harlem, she is broke and has to figure out a way to ditch the trunk full of gold.

She finds herself at the annual Undertaker's Ball, where she sees the big and dumb Jackson (Forest Whitaker), a bumbling undertaker's assistant. She spots Jackson as a mark that she can use as a cover and latches onto him immediately. She moves in with him to hide out, but Imabelle becomes taken with his innocence. For his part, Jackson falls head over heels in love with her. But the Mississippi mob catches up with her and takes her away. Jackson calls in his street-wise brother Goldy (Gregory Hines) to help him rescue Imabelle. Jackson fears that Imabelle has been kidnapped. But Goldy knows better—he still agrees to help him but Goldy wants the gold for himself.

An adaptation of the crime novel by Chester Himes.