A Model Daughter: The Killing of Caroline Byrne (Acorn TV) 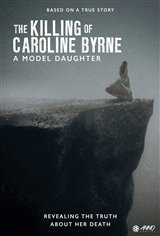 A dramatization based on the true story of Australian model Caroline Byrne (Cariba Heine), who was found on June 8, 1995 at the bottom of cliffs called "The Gap" by locals. It's known for being a suicide spot in Sydney.

The day before, several witnesses claimed to have seen her in the vicinity with two men, one of whom was believed to be her live-in boyfriend Gordon Eric Wood. One witness said Caroline was arguing with one of the men, while the other stood nearby.

Wood claimed that on the evening of June 7, he'd fallen asleep in front of the television and when he woke, noted that she wasn't yet home. He drove around and found Caroline's car parked near The Gap just before midnight and ran along the cliff, calling her name. Unable to find her in the dark, he called two others to come search. The police were also called to the site, but it was Wood who found her, using a flashlight beam.