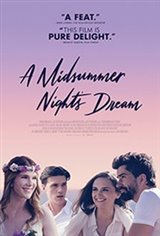 One of Shakespeare's most beloved creations, A Midsummer Night's Dream is the frolicking tale of lovesick young aristocrats, energetic but inept rustics, and mischievous woodland spirits. This production is a fresh and stylish reinvention set in present day Hollywood, making great use of the locations.

It's a place where fantasy and reality collide - where glamorous stars, commanding moguls, starving artists and vaulting pretenders all vie to get ahead. In the tradition of Baz Luhrmann's rapturous reimagining of Romeo + Juliet, this modern vision breathes new life into a classic tale.

Combined with a cast of established and emerging stars, as well as a pulsing original soundtrack, the film will appeal to ardent fans of the Bard as well as audiences discovering Shakespeare for the first time.