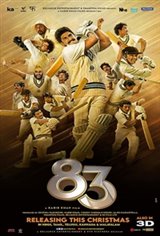 This film chronicles the journey of this team, who came back to their home country as world champions, teaching their nation to trust and place its hopes on its cricket players.