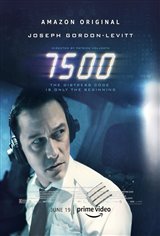 It looks like a routine day at work for Tobias (Joseph Gordon-Levitt), a soft-spoken young American co-pilot on a flight from Berlin to Paris as he runs through the preflight checklist with Michael, the pilot, and chats with Gökce (Aylin Tezel), his flight-attendant girlfriend.

But shortly after takeoff, terrorists armed with makeshift knives suddenly storm the cockpit, seriously wounding Michael and slashing Tobias’ arm. Tobias manages to lock the cockpit door and calls ground control to tell them they are experiencing a 7500 — the emergency code for an attempted plane hijacking. He's told that he is not to unlock the cockpit door under any circumstances.

He can see over a monitor as the hijackers warn him they'll begin murdering innocent people if he doesn’t open the door. Unnerved and emotional as he witnesses the terrorists harming and terrifying the passengers, Tobias faces an excruciating test.