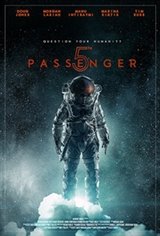 Set in 2151, after the Yellowstone Caldera volcano erupts throwing the Earth into chaos, 5th Passenger tells the story of a secretly pregnant female officer and her four man crew adrift in deep space in an escape pod after their transport ship explodes before reaching the new home planet.

They fight amongst themselves as they run low on air, but must work together to find a vicious alien hiding aboard their craft before it kills them all.