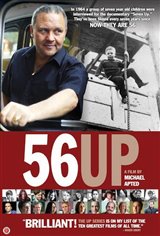 In 1964, filmmaker Michael Apted interviewed 14 British children who were seven years old, from different backgrounds. The first film was called Seven Up!. Every seven years, he interviews the same group again to see how they've changed over time.

The film follows an assorted group of people, like cab driver Tony; schoolmates Jackie, Lynn and Susan; and the heart-breaking Neil, who started out as a bright and sunny little boy but went on to become aimless and homeless. As they all turn 56, more life-changing decisions and surprising developments are revealed.

56 Up features all of the original participants with the exception of just one, Charles, who opted out after doing 21 Up in 1977.