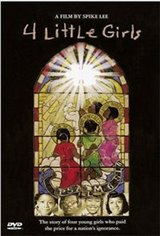 Director Spike Lee made his first feature-length documentary with this powerful story of the bombing of an African-American church in Birmingham, AL, in 1963, which took the lives of four girls, ages 11 through 14. The shocking incident received national press attention and became a rallying point in the ongoing struggle for civil rights, but while Lee's film examines the crime, the perpetrators, and the long struggle to bring them to justice, it also offers a close look at the four girls themselves as their friends and families recall, in moving detail, who they were and how they lived. A variety of civil rights activists, politicians, journalists, and lawyers are interviewed onscreen, including Walter Cronkite and a brief but disturbing meeting with former Alabama governor George Wallace.