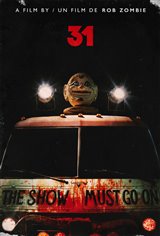 The day before Halloween in 1976, five carnies are kidnapped after investigating scarecrows that are blocking the road to their next gig. They are then held hostage in a remote industrial Hell-like underground compound known as "Murderworld."

On Halloween, they are told they have been chosen to play a violent game called 31, where they must survive 12 hours against an endless gang of sadistic clowns. The three who are running the game bet on who will survive the longest, and the prisoners' prize for surviving is their freedom. However, they have more to worry about than just the clowns. A much more sadistic plot comes into play in a grand scheme based on satanic rituals.