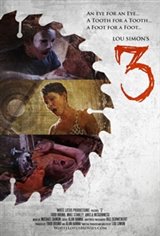 3 is an upcoming Tamil film directed by Aishwarya Rajinikanth Dhanush, who makes her directorial debut with the film. It stars her husband Dhanush along with Shruti Haasan.The film which is produced by Dhanush's father Kasthuri Raja, features music scored by Anirudh Ravichander while the cinematography is handled by Velraj.