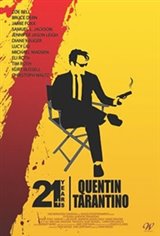 Quentin Tarantino's career is unmatched in its wellspring of talent and the diversity of subjects in his eight films to date. In the trendsetting RESERVOIR DOGS and the ground-breaking PULP FICTION, Tarantino revolutionized the status quo.

He reworked genre and celebrated badass women in films like JACKIE BROWN, KILL BILL and the gasoline-charged DEATH PROOF. He took on issues of race in America in DJANGO UNCHAINED and boldly rewrote history in INGLORIOUS BASTARDS, leaving us snowbound in the ultimate "who done it" murder mystery, THE HATEFUL 8. His films reap as much controversy as they do accolades.

The documentary coincides with the end of an era - the collaboration of Tarantino with the now disgraced Harvey Weinstein.