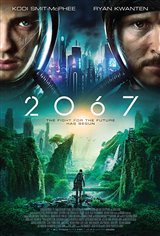 In 2067, Earth is on the verge of collapse after humans have done too little to reverse climate change. Plant and most animals are is extinct. A dramatic reduction in oxygen has led to manufactured oxygen, but with it being the only source of breathable air, it's making millions sick.

Despite efforts to find a cure, no advances have been made. Chronicorp, the world’s leading supplier of synthetic oxygen, has built a quantum time machine that pings the future in search of a connection with their descendants. They receive a response: a message from 400 years in the future that simply reads "Send Ethan Whyte." Unwittingly, Ethan (Kodi Smit-McPhee), a reclusive utility worker, barrels into the future as humanity and his sick wife's last hope. He arrives in a new world... completely alone. As he draws closer to the truth and uncovers an unthinkable conspiracy, he is faced with the ultimate question—who sent the message?