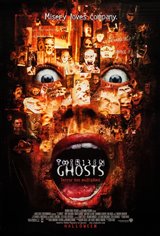 A state-of-the-art remake of the classic William Castle horror film about a family that inherits a spectacular old house from an eccentric uncle. There's just one problem: the house seems to have a dangerous agenda all its own.

Trapped in their new home by strangely shifting walls, the family encounters powerful and vengeful entities that threaten to annihilate anyone in their path. Soon the family is joined by an offbeat ghost hunter who is determined to free the spirits imprisoned in the house.

Caught in a frantic race to save themselves before it is too late, the human inhabitants realize the house is a riddle which contains the key to their imminent salvation - or destruction. -- © 2001 Warner Bros.