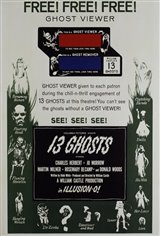 Gimmick-loving producer William Castle strikes again with this fun haunted-house thriller which invited audiences to find the hidden ghosts roaming about a haunted house through a special process called Illusion-O by which patrons could employ a special pair of red-and-blue-colored glasses to detect ghosts on the screen during the film's color-tinted sequences. The story is set in the mansion of the deceased occult scientist Dr. Zorba, whose nephew Cyrus and his family occupy the creepy estate and discover that they are not the only tenants. It seems the Doctor has been harboring 12 elusive specters on the premises, the appearance of which can only be detected through his final invention: a special pair of ghost-viewing goggles. To further complicate matters, it is learned that Zorba has stashed a small fortune somewhere in the house, and someone -- or something -- is determined to stop Cyrus and family from finding it. This film's original release featured an introduction from Castle, describing the Illusion-O process and demonstrating the proper use of the tinted glasses; he also appears in an epilogue stating that the glasses can be used to detect ghosts outside the theater!