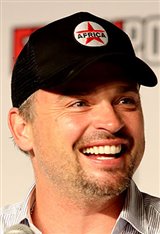 Born in New York City, tall and muscular (6'3") Tom Welling opted not to go to college after high school, becoming a construction worker instead. His good looks led to his discovery at 21 by a modelling scout and he spend the next twoyears travelling around the world for various shoots. In 2000, Welling moved to Los Angeles to pursue an acting career. He landed a recurring role on the TV series Judging Amy as Rob Meltzer, a karate instructor who develops a relationship with the lead character, played by Amy Brenneman. Welling was originally signed for three episodes, but proved so popular that he was written into three more. Before he could be secured for any more episodes of Judging Amy, he'd auditioned for the role of young Clark Kent in a new TV series called Smallville, based on Superman's early years. Admittedly not a fan of comic books or superheroes in general, Welling was at first reluctant to accept the role, but finally was convinced to take it on. His career immediately soared and he quickly landed guest appearances on two other series, Special Unit 2 and Declared, before showing up for work on Smallville.

Since then, Tom has been named one of People Magazine's Breakthrough Stars of 2001, was twice nominated for Best Actor in a Television series by the Saturn Awards, and won a 2002 Teen Choice Award for Male Breakout Star. He married Jamie White, his girlfriend of three years, on July 5, 2002. They have a home in Los Angeles but relocate to Vancouver while Welling is filming his series. In his spare time, Tom enjoys reading, playing basketball and jogging. He made his feature film debut as Steve Martin's eldest son in Cheaper By the Dozen (2003). He made his return to film in the 2016 film The Choice (2016).